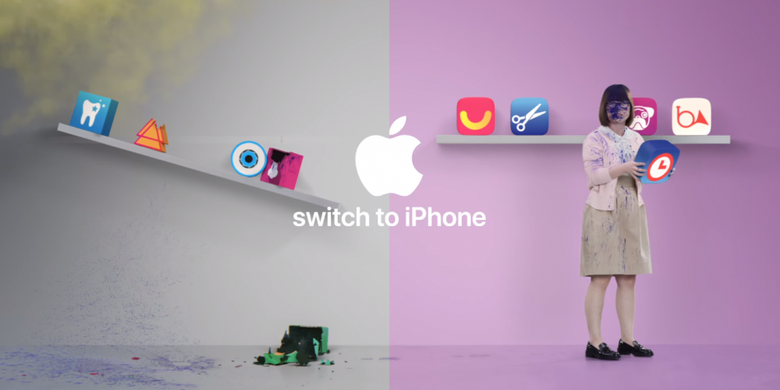 The operating system (OS) is one of the considerations of enthusiastic gadgets in choosing a smartphone. Because the OS that operates the device will affect several things such as user experience, update schedule, up to the features in it.

Currently, in the world of mobile software is dominated by two giant OSes, namely Apple’s iOS that is installed on the line of iPhones , and Android from Google, which is more widely distributed in many smartphone vendors. So, which is more? Android users move to iOS or vice versa?

Without definite data, the answer that will appear is only based on the surrounding observations. To find out quantitatively, PC Mag spread the survey for three days and involved 2,500 US respondents. More than half of the respondents or 54 percent claimed to have an iPhone and 27 percent had a Samsung smartphone.

From the results of the survey, 18 percent were Android users who moved to iOS and 11 percent moved from Android to another OS that was not mentioned. Other operating systems can be Windows Phone or BlackBerry, but this survey only focuses on Android and iOS.

The majority of respondents, namely 71 percent, claimed to remain loyal to the OS used today. Then, what exactly is the background of users switching other OSes? User Experience (UX) The survey results show, as many as 47 percent of those who turned to iOS found that the user experience felt more satisfying. Only 30 percent of former iOS users feel that UX Android is better.

The two UX platforms are very different. It could be that operating a fully new UX becomes a special satisfaction. Price The next factor is the price problem. iOS on the iPhone line goes into the ranks of high-end phones , which are certainly priced at mid to high prices.

The price is “eleven-twelfth” with the flagship Android cellphone vendor, like Samsung or Huawei, which dominates the world’s top three smarpthone markets. However, the more value of Android is its wide market to mid -level and even entry-level phones with the Android Go Edition version.

This allows various groups to have the opportunity to try out the Android platform with a friendly mobile price. That’s why it makes sense if 29 percent of former iOS users who move to Android are satisfied in terms of price. Only 11 percent of Android users claim to use the iPhone for investment.

Feature The next reason is the variety of features that can be enjoyed. Percentage of Android users to iOS and vice versa due to the fact that features are actually very thin. 24 percent of former iOS users who moved to Android claimed that the features on Android were better.

In contrast, as many as 25 percent of the reasons for former Android users who moved to iOS, claimed to be targeting more powerful features. While six percent of respondents, whatever the OS claimed, the reason for changing the OS was the wealth of features, better customer service, and routine software updates.

OS is not the main one Interestingly, from the results of a survey summarized from PC Mag, Sunday (08/26/2018), the OS used by vendors is not a major consideration for prospective buyers in choosing a device. Only 19 percent of the total respondents made OS the key factor in choosing a smart phone.

There are two main criteria that are observed by consumers, namely the price tag of 33 percent, the cellphone brand itself by 26 percent. The majority of respondents with a percentage of 56 percent said they did not really bother with the launch of a new smartphone.