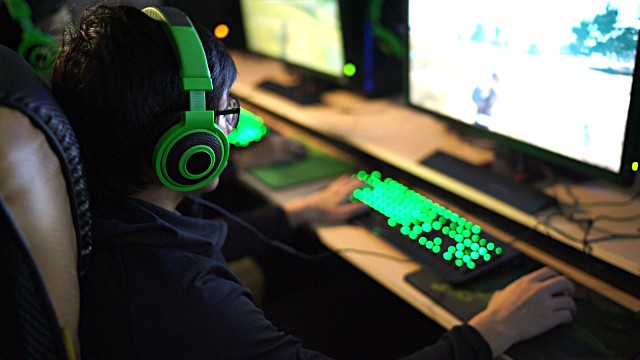 Online games have a massive appeal for those wanting to play with other people. It has more of a competitive nature, and often provides rewards for the victors. Single player games, while offering lengthy story-driven content, may feel boring for some. With only the computer to play with, it can become very repetitive.

As far as accomplishments are concerned, online ones feel more real – for the lack of a better word. Offline games can feel very closed-off. You never meet people, and the game feels very robotic. Online games, with plenty of players running around, can make the experience feel more alive. Because of that, online games are more popular than ever. Since everyone can easily access the internet, playing with others is as easy as pressing a button.

A lot of online games today have a similar setup. Players join teams – either randomly or by pre-formed groups – and face another team. They can then use teamwork to accomplish goals and defeat their opponents. Games such as League of Legends, Dota 2, and Counter Strike all offer competitive matches between players. For those who have less playing time available, this is the one for you. Matches in these games finish in under an hour. No adventures, no quests, just an arena filled with two teams.

Those with the competitive drive can also go a step beyond casual matches. Each game offers a ranked version of the matches, where players compete for ranks on a global scale. With its quick games, competitive atmosphere, and adrenaline-fueled action, it is hard to resist for loyal players.

A Sense of Community

For those who like adventure games, offline ones can feel empty. You are the only one in the virtual world, surrounded by computer-controlled characters. Online games change that, giving you the feeling of a lively virtual community. People can trade, make friends, and even plan events together for their online activity. Many people have even met their spouses in online games.

The appeal of meeting people without leaving the comforts of home is a great factor for some players. Those who still want to feel connected with people can go the ‘halfway’ measure of playing online. There, you can chat with others, talk about interests, and meet new people along the way.

With the good, come the bad. While online games offer excitement and a sense of social activity, they are also home to toxic behavior. Even in the early days of online gaming, voice chats and other hate messages have been a major occurrence. Nobody likes losing – and they are not afraid to express how they feel. The adrenaline rush of competition combined with anonymity makes a lot of players act their worst.

There have been times were hate messages go through players. In worst cases, players can even give another person trouble by calling the police on them. Yes, that has been a malicious act especially in the United States. For those who want to play online, it is always a good idea to stay anonymous, never sharing personal information to others.

Another downside of online games is the ‘legal’ gambling system they have. Games can offer loot boxes – a mechanic where you buy a ‘mystery’ item to see what is inside. These boxes usually have a constant price. The inside can vary from worthless junk from the game, to expensive and rare stuff. You can see what this means – players must gamble in order to get better items.

These items can even be game-changers, where the game becomes easier with these rare items on your possession. Loot boxes are a common occurrence in free-to-play games. They justify this by saying that the actual game is free – you only pay for cosmetic items. Cosmetic items do not affect the gameplay, and are only for visuals. These include clothes for your characters, mounts such as horses, cars, and more.

Paid Subscriptions are a common way for online games to make money. They justify the amount by saying it pays for servers, maintenance, and new content. For several games however, they take it even further. Aside from paying for subscription, you also have to pay for the game itself – that includes any potential expansions. This means that if you buy the game itself, you still had to pay monthly to be able to play it.

World of Warcraft for instance is an online game with over 10 million active players. To get started, you need a $15 monthly subscription. The subscription gives you access to the game up until the last expansion. On top of that however, if you want the latest expansion (plus new ones), you have to pay about $100. For a lot of players with limited budgets, this can be a massive turn-off. Not only will you pay monthly, you also have to pay a one-time price for the same game. The game also offers cosmetic items on top of that, which costs around $25.

Online games can also be very addictive. The idea of accomplishment can be a motivating factor. For those who may feel inadequate in the real world, online gaming can be an escape. World of Warcraft for instance has been a very addictive game, with players from its launch in 2004 still active today. There has also been stories about people skipping school, ignoring work, and staying in their rooms all day just to play.

Since players associate themselves with their in-game characters, achievements in the game become their own. This can give a sense of satisfaction – something that they may be missing in the real world. It can be tough, and for those who cannot control their gaming habits, it can ruin lives. People have lost work, dropped out of schools, and even lost relationships because they could not (or would not) stop.

Gaming can be very addictive, as it can be a way to feel good about yourself. However, without proper monitoring, this can spiral out of control quickly.