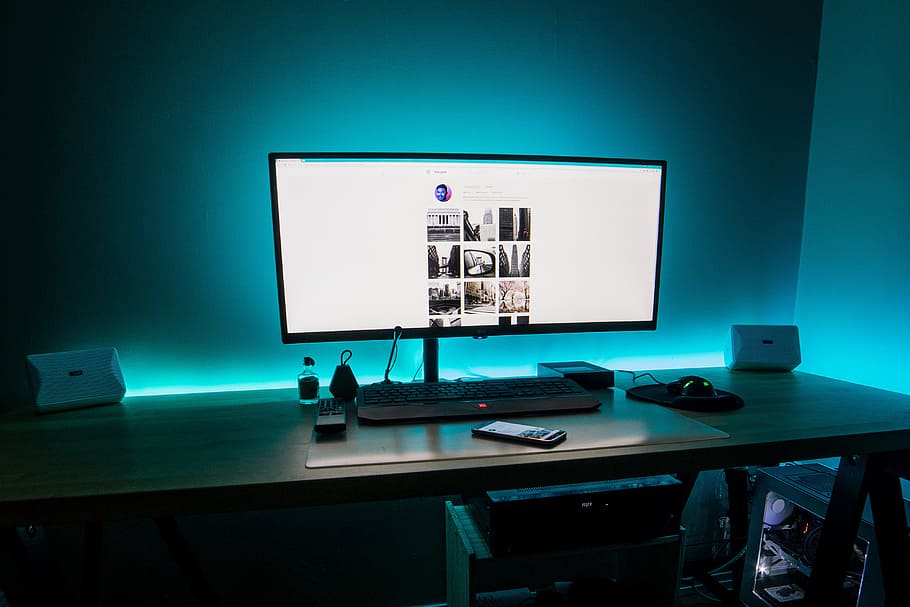 Plenty of PC users today are no longer satisfied with the standard-sized monitor. Many want a larger screen in order to navigate their many programs. For those thinking of upgrading from their standard single monitor, it can be quite confusing where to go next. Plenty of people prefer wider screens, but there are also advantages to having smaller, multiple screens connected to one computer. Here are a few advantages and disadvantages for your potential monitor options.

Why and Why Not the Ultrawide Screen

Ultrawide screen monitors have grown in popularity over the years. The concept is simple, it is a singular monitor – but it has a wider screen. Its screen size can cover two, three, or even four standard-sized monitors lined up. This makes the ultrawide monitor a must-have for those wanting the ultimate visual experience.

They are often curved, giving you the optical illusion of being ‘closer’ to the screen. Playing in these ultrawide curved monitors offer superior immersion especially in games.It is somethingthat you simply cannot recreate on a single monitor or on multiple connected monitors. Watching movies is also a lot more enjoyable with a wider screen.

Of course, not everything is great about an ultrawide monitor. The most glaring issue when it comes to acquiring one is the high price. Ultrawide monitors can be very expensive, going over the thousand-dollar line. This can be a deal breaker, as plenty of people may not want to spend that much on the monitor alone.

Another issue with an ultrawide is durability. Monitors with faults always have one recourse – throw away and replace. A crack in the screen for example can make the entire monitor unusable. Replacement and repairs are possible, but it can be difficult to process. The easiest (and most convenient) way to solve a broken monitor is simply to replace it. With a very expensive monitor, this becomes a much harder decision. In addition, because it is a singular monitor with a very heavy frame, a single bump or shake can send it crashing down. This makes it a very vulnerable piece of technology, with a lot of money on the line.

The alternative to buying a singular ultrawide screen is connecting standard sized monitors together. This is called a multi-monitor setup, which is a very popular concept for many PC users. The idea of multi-monitors is simple; you can take advantage of the different screens to do multiple tasks. This is why multiple monitor setups are also found in offices – plenty of users with various objectives can use them.

Of course, those who play video games can also use them to enhance the viewing area. Instead of a single monitor, the extended screen size creates a better feel of immersion. Players can also take advantage of these multiple monitors by assigning which displays where. For example, the main screen can show the video game itself, while another screen shows the map, and another screen can look at guides online.