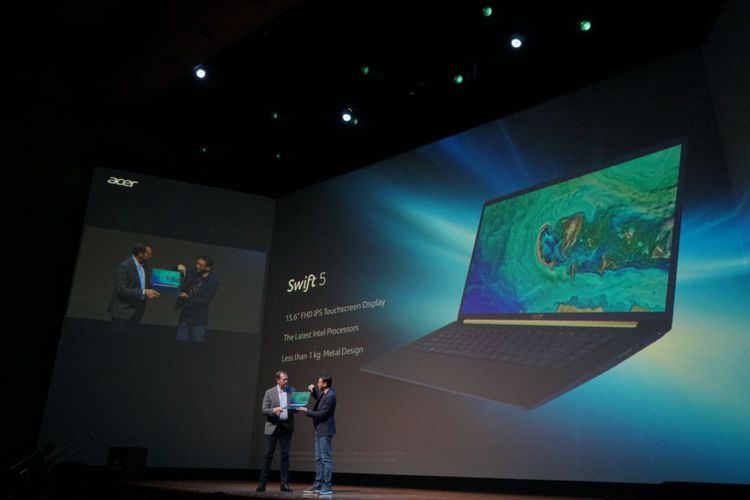 Measuring 15.6 inches, the Swift 5 load is not even one kilogram. The laptop is designed specifically for fashionable and productive society, and has high mobility. “We received a positive response to the 14-inch Acer Swift 5 version which is considered lightweight.

Now we are challenging ourselves to bring the 15.6-inch model is bigger but the same light, “said General Manager, Consumer Notebooks, IT Products Business Acer, Jerry Hou, on stage launch “We maintain the weight below 1 kg using super-thin bezel and larger chassis ,” he added.

The Swift 5 screen supports touch features ( touchscreen ) and has Full HD resolution. Also embedded technology “Color Intelligence” which is able to adjust the gamma and color saturation in real-time according to the surrounding conditions.

In addition to its slick design and lightweight load, Swift 5 also relies on well established performance. The laptop uses the latest Core i7 processor based on Intel Coffe Lake platform, paired with a battery that is claimed to last all day.

About storage, Swift 5 relies on SSDs up to 1 TB and 16 GB DDR4 memory. Connectivity via second-generation USB-C, USB-A, HDMI, and SD card reader. Not yet clear when this device is available in the market. The price is also not announced. Let’s wait.

In addition to introducing series of notebook and PC series “Predator” and “Nitro” for game lovers, Acer is also presenting a thin and light laptop series in Global Press Conference titled “Next @ Acer”, this week.