After a variety of rumors circulating in cyberspace, now Asus is officially entered in the competition map gaming smartphone. The gaming phone is Asus ROG Phone that is ready to compete with Xiaomi Black Shark and Razer. 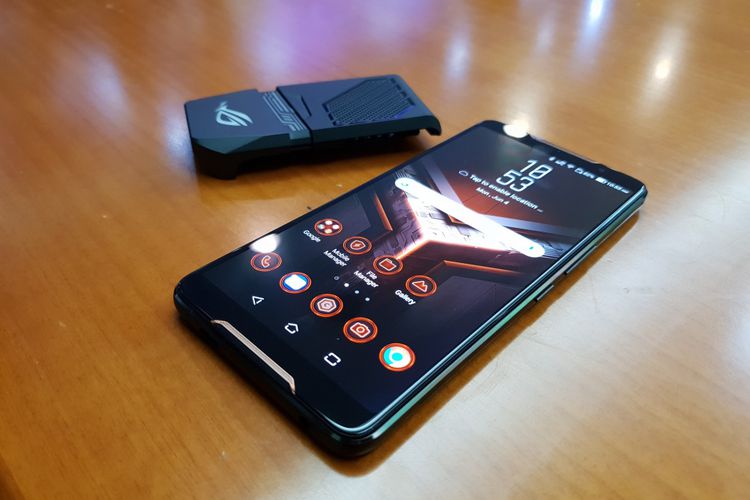 Senior Product Director of Republic of Gamers Kris Huang said the mobile gaming industry is growing rapidly. Even according to him, in some time to come, the potential of mobile gaming will bring a large income.

“It’s not just playing games, but now the number of e-sports viewers is also up, ROG Phone is present for mobile gamers,” Huang said on the launch stage in Taipei, Taiwan, Monday (4/6/2018). When viewed from the specifications, on paper Asus ROG Phone this does have a qualified hardware to play games in high quality.

The first gaming pocket of Asus’s first gaming phone is armed by Snapdragon 845 at a speed of 2.96 Ghz. This is one of the processors that cater to high-end phones. With this processor, Asus dare guarantee there will be no lag or broken movement that will be experienced by users during game play.

Then Asus matches the RAM size of 8 GB with a ROM of 128 GB. With this size is expected users can store more games in the phone. In addition there are also other variants with ROM of 512 GB. The size of this phone is actually not too big.

In terms of software, Asus also looks quite serious work on this gaming phone, to the extent that Taiwanese vendors are modifying the Android operating system different from other Asus mobile phone products.

If usually the standard Asus phone using ZEN UI, Asus ROG Phone using the display of ROG Gaming UI based on Android Oreo. In this interface also added a number of features that can monitor devices ranging from temperature, external fan speed control, X Mode, to the speed of the processor.

Asus ROG Phone uses 4,000 mAh battery as the main power source. Not to forget Asus pinned fast charging feature so that the battery can be fully charged faster. In addition, the phone is also equipped with several additional accessories such as external cooling, controller games, to mobile dock to change the phone into a PC.