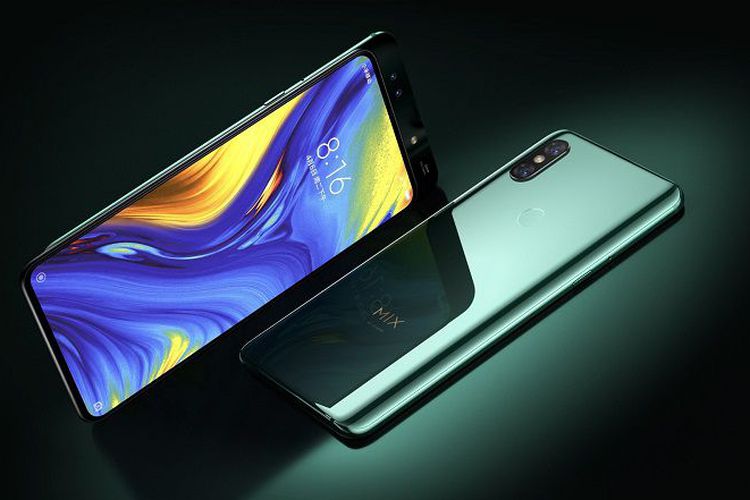 Mi Mix 3 officially launched Xiaomi today, Thursday (10/25/2018). This flagship cellphone was introduced directly by the CEO, Lei Jun. Like the rumors that have developed over the past few months, Mi Mix 3 really carried a new design compared to the previous Xioami flaghsip.

Still relying on a clean jumbo screen with a minimum frame, in Mi Mix 3, Xioami pinned two front cameras with a slide mechanism. From the side of the screen, Mi Mix 3 is equipped with a 6.4-inch AMOLED screen with a 93.4 percent body-to-screen ratio with full HD Plus resolution.

Camera Besides the slider, Xiaomi also brings other innovations by pinning a total of four cameras 2 front cameras 2 rear cameras). The two front cameras are mounted on a magnetic slider with each 24 megapixel sensor resolution and 2 megapixels.

The main sensor is supported by Sony IMX576 which is claimed to reach 1.8 nanomikro pixels with 4 pixel binning in low light conditions. The resolution will effectively be reduced by 6 megapixels under these conditions.

While the dual camera behind each has a 12 megapixel configuration and 12 megapixels. The main camera is supported by the IMX363 sensor with 1.4 nanomicro pixels, and a lens with f / 1.8 aperture. While the second telephoto lens has an open lens f / 2.4 and a pixel size of 1.0 nanometers.

Xiaomi Mi Mix 3 features Night Mode features such as Huawei P20, which allows users to aim at objects with a low shutter speed using their hands.

Reported from GSM Arena, Thursday (10/25/2018), when introducing Night Mode, Lei Jun complained about the ability of Mi Mix 3 with Huawei P20 Pro and claimed to produce better images than its competitors.

The Mi Mix 3 camera also features AI scene recognition and 960 fps slow motion video feature that can be inserted as a background music. Shifting to the hardware sector, like the current Android flagship line, Xiaomi Mi Mix 3 is armed with Qualcomm Snapdragon 845 chipset.

There are three variants of capacity that can be selected, namely 6 GB RAM and 8 GB with 128 GB of internal memory (ROM), and the biggest is 10 GB RAM with 256 GB of internal memory. For information, Mi Mix 3 is not equipped with an external memory slot, considering the size of the ROM is quite large. The fate of the 3.5 mm headphone jack plug was removed at Mi Mix 3.

Mi Mix 3 is equipped with a 4,000 mAh battery that is supported by wireless charging. For this launch, Mi Fans had to delay the fun of transferring Mi Mix 3 with 5G networks. But Lei Jun promised to launch the Mi Mix 3 with 5G connectivity in the first quarter of next year.

For software, Mi Mix 3 will run with the Android 8.1 Oreo operating system which is coated with MIUI 10. To the left of the device is a physical button to call Xiao AI’s assistant, like Bixby to Samsung. Unfortunately, Xiao AI only understands the commands in the Mandarin language, so it does not know how it works if marketed outside of China.

For the 10 GB RAM and 256 GB ROM, which is referred to as the “Forbidden City”, it comes in blue and the gold-plated lion statue logo. The most “Mi” mix of Mi Mix 3 is priced at 4,999 yuan. For ordinary variants, it has begun to be ordered in China today, while the “Forbidden City” variant will be available from the end of November.